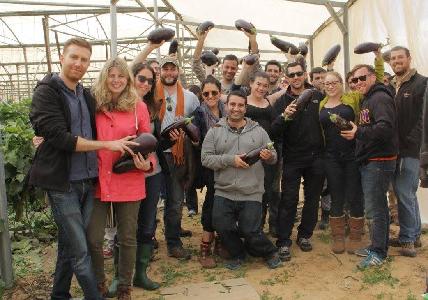 Young leaders tend to be agents of change. Members of JNFuture are no different. They are a mix of high-impact Jewish young people living in the diaspora who are willing to commit their time, leadership, talents, and resources to strengthen Israel through the lens of Jewish National Fund.

But what happens when these same young leaders live in the Holy Land? You get the newest chapter of JNFuture -- a chapter on a mission not only to see how JNF transforms Israeli society and the land, but also living JNF.

"We are the kibbutz galuyot (gathering of Israel) that JNF talks about," says Natalie Solomon, director of the Am Yisrael Foundation. Her organization is JNF's newest Israeli partner. The foundation partnered with JNF in October 2015 and also serves as the umbrella for the Tel Aviv JNFuture chapter.

"Many people come to Tel Aviv to be pioneers. They want to build something, to change the country. If Nefesh B'Nefesh is JNF's aliyah arm, we are its klita (acclimation) arm," Solomon says. "JNF is a powerful part of our ability to engage in modern pioneering."

Solomon says young people today are more transient and open-minded than those in previous generations. She sees JNFuture as the family and home away from home for any young Jew (or non-Jew) who wants to spend time in Tel Aviv. She also sees it as the apparatus for moving Israeli civil society forward.

"Every aliyah has an impact on Israel," Solomon says. "Young American Jews bring leadership and engagement in improving civil society through volunteerism."

"Our energy and commitment to civil society is what Israel urgently needs right now," says Solomon, referring to the organization's travels down south to the JNF Young Farmers Incubator Project in Halutza, where participants eagerly picked eggplants for the farmers. Its Adopt-a-Safta project pairs young internationals and Israelis with lonely Holocaust survivors, helping both populations overcome loneliness and isolation.

The group is also working to infuse greater Jewish identity into Tel Aviv's secular young adults. "White City Shabbats" bring a diverse mix of immigrants and locals together for a traditional Shabbat meal with a modern flare.

"What does it mean for the Jewish state when the young people forsake their Jewish identity for an Israeli identity?" Solomon asks. "We come to Israel because we are Jewish and then we become Israeli. We believe Jewish identity is a key component of building the type of country we want to see."

Moshe Haim, 34, from Italy agrees. He said that he wanted to move to Israel for 10 years, but it was only after an Arab terrorist threw a Molotov cocktail through his synagogue's door that he decided it was time to make a change. With a love of Israel from childhood thanks to the JNF blue boxes, into which he put money every Friday to plant trees in and sustain the Jewish state, Haim moved to Israel in 2013.

Haim, who has an infectious smile and suave accent, says he immediately embraced JNFuture and Am Yisrael Foundation programming as a way to make friends and find support. Now, he has met the young woman he hopes to marry.

"It is really important to bring people with no roots together, individuals with no real family in Israel, as they need to create new connections to feel they are building a future here," Haim says. "Otherwise, they will go back to where they came from."

He describes the group as vibrant because no program ever ends. At an event, someone will say, "Let's a have a Spanish dinner at my place after this," and from one activity they go to the next and form a close-knit group of friends who become a family.

This family spirit has become increasingly important to Sariba Feinstein, 25, from Iowa. She enrolled in a combat unit in early December and for the month prior to starting service she slept on friends' couches and took advantage of their familial hospitality.

Feinstein made aliyah in 2013 after participating in a Birthright-Taglit and then a MASA Israel program.

"I was in love with Israel and didn't want to leave," Feinstein says.

Originally, Feinstein was told she would not have a mandatory army requirement, but when she received documents asking her to come to the army enlistment office, she realized even though the recruitment was likely a mistake, she would serve.

"I signed my kids up for the army when I decided to make aliyah," she says, considering any future children–Israeli children–she might have. "I cannot ask them to do something I didn’t do."

With the help of Nefesh B'Nefesh and Friends of the IDF, Feinstein secured a position in a combat unit.

"This is an incredible social group," Feinstein says. "It has really been amazing. We all love Israel. These are people who want to be here and are doing something about it."

Ask Michael Ganoe if JNFuture is making a difference and he will answer with one word: love.

"I love JNF," says the Christian supporter of Israel, who now lives in Tel Aviv and runs a pro-Israel podcast. He became involved with JNFuture soon after arriving in Israel with $600 in his pocket and a dream. Today, he says, he is a part of the Israeli community through the program.

"I like how we all look out for each other. There is a unity like I have never seen before," Ganoe says. "Tel Aviv is the best and most stylish place for a young person to be. This country has changed my life."
PLANT TREES IN ISRAEL