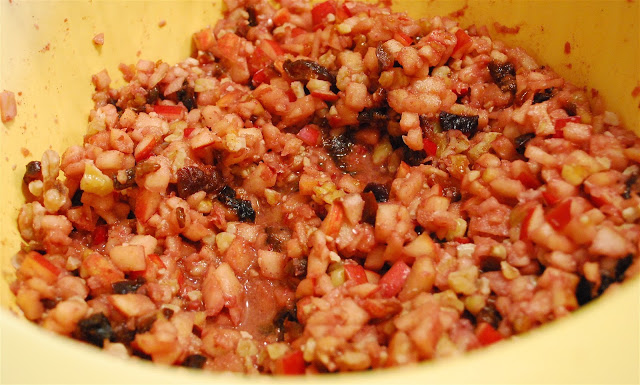 Margot Alfie, a JNF board member in Atlanta and personal chef extraordinaire, will be celebrating her 26th Passover in the United States this year.

Alfie's grandparents emigrated from Syria to Mexico at the beginning of the 1900s. "My parents and I were born in Mexico. Therefore we are Mexican, Syrian, and also Jewish," she says. "Growing up in a Middle Eastern Mexican home, I developed a very unique culinary taste. Sometimes we had a Syrian meal, sometimes a Mexican meal, but sometimes we had an absolutely delicious fusion of the two."

Margot has graciously shared with us her special Passover charoset recipe, made with dates and sweet red wine. Charoset is a non-negotiable part of the Passover seder, symbolizing the mortar used by slaves in Egypt. In Ashkenazi tradition, it's most often made with apples. But for Alfie, charoset isn't charoset if it's not made with dates, the ubiquitous fruit of the Middle East.

Charoset also frequently includes nuts and cinnamon. "My grandmother made this with chopped nuts and that’s how I like it, but my kids? One prefers it with nuts, the other doesn't. So make this to suit your family,” she says. And for the sweet wine? The traditional favorites of Manischewitz or Mogen David work perfectly.

Enjoy this #RecipeOfTheWeek, and if you make any of these recipes, be sure to send a photo of your creation to teddyherzl18@gmail.com or tweet it to @JNFUSA with the hashtag #JNFfoodie. We might share it!

Have a Chag Pesach Kasher v' Sameach -- a happy and healthy Passover!

1 pound pitted dates
1/3 cup sweet red wine
1 cup chopped nuts, optional
Pinch of cinnamon, if desired
Pecan halves, for garnish
Directions
In a medium saucepan, combine the dates and enough water to cover them by at least one inch. Bring to a boil, then reduce heat and simmer over low heat until the dates are soft. The more dried the dates are to start, the longer they will take to cook. When the dates are tender, remove then from the heat and drain all water. Move cooked dates to the jar of a blender or bowl of a food processor. Process until texture is completely smooth. Move pureed dates to a bowl and allow to cool. Stir in wine, and if using cinnamon, add it at this time. Store covered in the refrigerator until ready to use. May be made up to one week in advance. When ready to serve, stir in nuts, put mixture in serving bowl, and garnish with pecan halves. Makes 3 cups with chopped nuts.

-- Adapted from a recipe provided by Margot Alfie, Cooking with Margot