What is Chanukah? A reminder that light can transform darkness 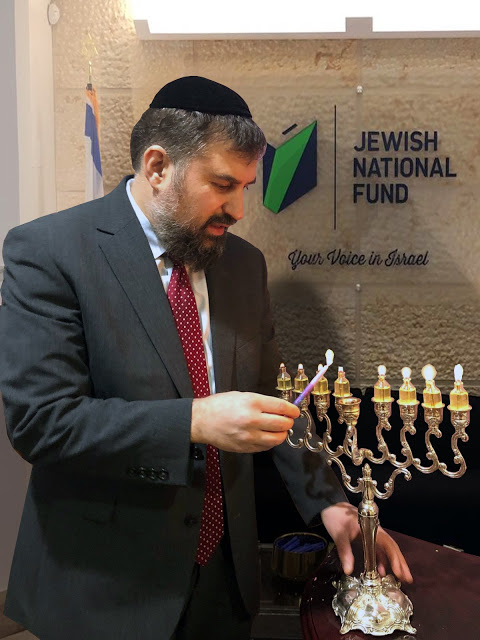 Yossi Kahana lights the menorah.
Chanukah is the Jewish eight-day, wintertime "festival of lights," celebrated with a nightly menorah lighting, special prayers, and fried foods. Chanukah begins on the eve of Kislev 25 and continues for eight days. This year, the holiday runs from December 22-30.
What we are celebrating again?
In the second century BCE, the Holy Land was ruled by the Seleucids (Syrian-Greeks), who tried to force the people of Israel to accept Greek culture and beliefs instead of mitzvah observance and belief in G‑d. Against all odds, a small band of faithful but poorly armed Jews, led by Judah the Maccabee, defeated one of the mightiest armies on earth, drove the Greeks from the land, reclaimed the Holy Temple in Jerusalem and rededicated it to the service of G‑d.
When they sought to light the Temple's Menorah (the seven-branched candelabrum), they found only a single cruse of olive oil that had escaped contamination by the Greeks. Miraculously, they lit the menorah and the one-day supply of oil lasted for eight days, until new oil could be prepared under conditions of ritual purity.

To commemorate and publicize these miracles, the sages instituted the festival of Chanukah.
Remind me... how is Chanukah observed?
At the heart of the festival is the nightly menorah lighting. The menorah holds nine flames, one of which is the shamash ("attendant"), which is used to kindle the other eight lights. On the first night, we light just one flame. On the second night, an additional flame is lit. By the eighth night of Chanukah, all eight lights are kindled.
Special blessings are recited, often to a traditional melody, before the menorah is lit, and traditional songs are sung afterward.
Since the Chanukah miracle involved oil, it is customary to eat foods fried in oil. The Eastern-European classic is the potato latke (pancake) garnished with applesauce or sour cream, and the reigning Israeli favorite is the jelly-filled sufganya (doughnut).
Jewish National Fund is working hard to create a future of hope for the land and the people of Israel, so for us the messages of Chanukah is clear. A little light goes a long way. The Chanukah candles are lit when dusk is falling. Perched in the doorway, they serve as a beacon for the darkening streets. No matter how dark it is outside, a candle of G‑dly goodness can transform the darkness itself into light.
Happy Hanukkah!

Yossi is a director of JNF Task Force on Disabilities.
PLANT TREES IN ISRAEL