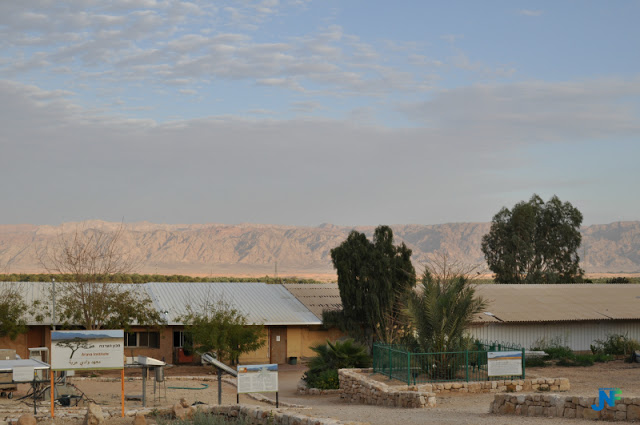 When I wake up most Tuesday mornings on campus here at the Arava Institute for Environmental Studies, I stare out the window at the beautiful mountains, and one thought immediately crosses my mind: "Damn it's dry as a bone out there."

Now, although I have lived in the Arava desert since last September and in Israel for the past few years, there must be some part of me that pines for the rain-soaked green surroundings of the north of England, my native country. This often puts me in a bit of a dilemma. Should I be brushing my teeth in this place of acute water shortage? Or maybe I should be drinking imported Icelandic Coca-Cola to avoid using the local non-renewable groundwater? It's a fascinating subject, and one that we have started to study and research this semester in the Water Resources in the Middle East class with Clive Lipchin.

This brings me back to Tuesdays. Last week, instead of my usual staring-through-the-window tradition, I grabbed my bag and headed to the bus to join students, interns, and staff of the institute on a three-day transboundary water management trip just before International Water Day.

Starting with the Arava, this parched area somehow supports agricultural settlements. We met with someone who is responsible for trying to find more water resources for the area, and to find out how to make better use of the ones that already exist. As we neared the Dead Sea and saw the destruction wrought by factories, sinkholes, and lack of water flow on this fast-disappearing natural wonder, a new realization of the delicate water balances in our region started becoming clear.

As we stood shivering in the dusk at what once was a beachfront hotel and now would not be worthy of the title sea-view, and heard the struggling machines of the salt makers of the West Bank, there certainly was a feeling of a technological march forward and abandoning nature behind.

The next morning we headed off to the Jordan River. Excitement was high as one of our group members was baptized at the point where Jesus was so many years ago. However, the excitement was tempered by the horrific state of the water itself. As we discussed ways of rehabilitating the river and the Dead Sea, we came to understand the common thread running through all the different plans. Cross-border cooperation is the only way forward, especially when it comes to a plan such as the Red Sea Dead Sea Conduit, which will need to involve input from Israelis, Jordanians, and Palestinians.

Continuing in the West Bank, we saw and understood how the Arava Institute's Center for Transboundary Water Management team is practicing day-to-day transboundary cooperation between Israelis and Palestinians, to make life in this difficult corner of the region better, using gray-water systems and solar-powered groundwater pumps.

Moving on to Tel Aviv, we saw how it's possible with hard work and good will to rehabilitate a water system such as the Yarkon River, and ended on a high note with a wonderful urban farm growing leaf vegetables in hydroponic boxes on the roof of the Dizengoff Center.

All in all we may be in a dry and troubled region, but hope for a peaceful and less parched future is always there (but only if we work together).

This post originally appeared on the Arava Institute blog.
PLANT TREES IN ISRAEL