The Arava desert: Land of goat milk and honey 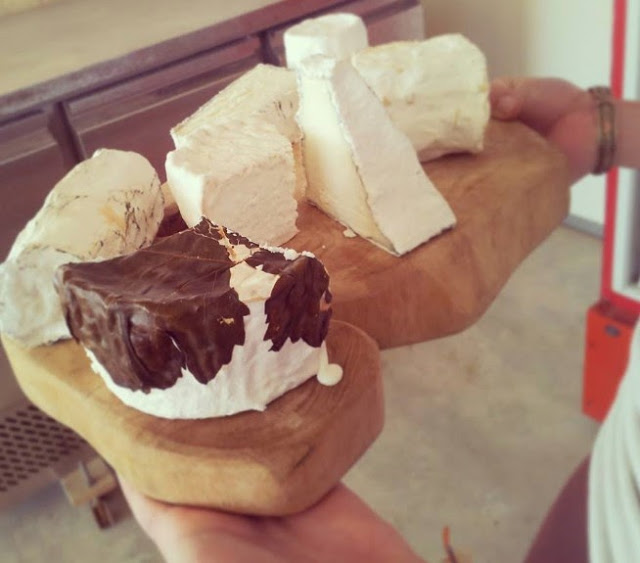 Ran Porat is a rule breaker. When someone tells him something can’t be done, he sets out to prove the opposite.
When he decided he wanted to make honey in the desert, people laughed. When he said he wanted to breed bees in the Arava -- the driest, hottest part of the Negev -- they told him he'd never make it. He disagreed. He was young, straight out of the army, and he set out to show everyone how wrong they were. Today, the Porat Apiary is a successful family-run business with thousands of productive beehives throughout the Negev and is renowned across Israel for its unusual honey flavors.
Not far from the Porat Apiary is the Kayema Farm, a place rich with the flow of milk -- goats' milk. An unusual choice for the Arava, the decision has been enormously successful. After seven years of competing with the rest of the fruit and vegetable farmers in the Central Arava, the Ofaimme family decided to try something new and different. So they brought 20 Alpine goats to Israel and acclimatized them to the desert heat. The goats have been thriving in the area for the past seven years and their milk produces special cheeses and many flavored fruit yogurts.
The Porat family is one of the founding families in the Central Arava, a region characterized by sharp climate changes, extreme topographical conditions, scare water, and dramatic natural beauty. Chacha and Hagi Porat were founding members of Moshav Ein Yahav and, while Hagi passed away in the early '90s, Chacha is still an active member of the moshav (farming community). She also plays a role in the family honey business and still manages to create beautiful and unusual art.
Hagi was a successful vegetable farmer, like most in the region. Ran, however, was not interested in following in his father's footsteps. He wanted to do something completely different, so he chose bees.
He has lived up to the challenge, with plenty of patience, a love of the business and, most importantly, the help of his family -- his wife, Irit, Chacha and, every now and then, his brother, Ziv.
"We started with five beehives in 1990 and we now have more than 2,000 throughout southern Israel," Iriit said. "We have six different types of honey -- citrus, wildflower, eucalyptus, avocado, harhavina (a purple, thorny flower called Eryngium Creticum), and a special tamarind honey from the tamarind tree.”
The honey is distributed to major wholesalers, retailers, and nature shops throughout the country.
The Central Arava is not an easy place to live. It's far from all the major cities and towns, and the weather, especially in the summer, is extremely hot. There is very little rain during the year. But the family remains.
'Living David Ben-Gurion's dream'
"We love it here because it’s quiet and peaceful," said Irit. "You don’t feel the rush of city life and it's a special place to raise children. We don’t have to worry about them like you do in the city. They can go around the moshav and the area easily and safely."
“And besides," she added, it’s meaningful to live so close to the border of Israel and to feel that we are living David Ben-Gurion’s dream of settling the desert and protecting the country, like the halutzim (pioneers) of the '60s and '70s.”
Unlike the Porat family, the Ofaimmes are relatively new to the Central Arava – they moved from the north to Moshav Idan in 2000 – but it has been an exciting and rewarding move for them.
Kayema Farm is run by husband and wife team Ynon Ofaimme and Adi Rappaport, in partnership with Ynon's brother, Hedai, a culinary expert who writes about food and provides recipes in Ha'aretz on a weekly basis.
Wanting to do something that would be healthy and easier to keep organic and sustainable (kayema means "sustainable" in Hebrew), they chose to breed milking goats. The goats eat the plants that are left behind after the fruit and vegetables have been harvested.
The couple built a place to make the cheese and yogurt and everything grew from there. Today, they have 110 milking goats that produce 500,000 liters (about 528,344 quarts) of milk a year. Kayema manufactures more than 20 types of boutique goat’s milk cheeses under the Ofaimme brand, as well as six different yogurts; five drinking yogurts -- plain, date, peach, apricot, and almond; and a plain, thick version for eating.
"We are experts in French-style cheeses, what we call the 'white mold' cheeses like Camembert, but we also have other fresh cheeses as well,” Adi said. "All our products are based on traditional French cheeses, which we make 'hand-made style.'"
The Porat and Ofaimme successes show that while the desert may seem, at first glance, like a place God has forsaken, the oasis of richness known as the Central Arava is, literally, a land flowing with milk and honey.
This article originally appeared in B'Yachad, the newsletter of the Jewish National Fund. Read more B'Yachad here.
PLANT TREES IN ISRAEL