From Gaza to Halutza: Stories from 10 pioneering years on a new frontier 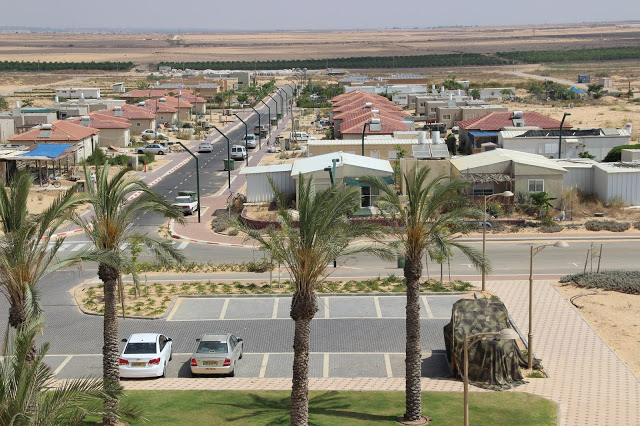 Standing on a hill overlooking B'nei Netzarim, one of the small communities that comprise Halutza in the southwestern Negev desert, one can see a dry, rocky sandscape spread all around.

The sky seems a little bigger here, without urban life blocking its grandeur, but this expansiveness also serves as a reminder of the isolation necessary to create it. This is indeed pioneer land that finds residents building something from nothing, all while coping with the difficulties of remote desert farm life and the painful memory of a life that once was.

August 2015 marks 10 years since the Israeli disengagement from the Gaza Strip, a move executed in hopes of bringing quiet and stability to both Israelis and Palestinians in the region. This was one of many steps made in peaceful concession for a future Palestinian state, echoing previous Israeli land concessions for peace, such as Israel's return of Sinai to Egypt under the Egypt-Israel Peace Treaty of 1979.The Gaza decision, which removed and ultimately displaced families from the 21 communities of Gush Katif, was a definitive step in an attempt to make peace with Palestinian neighbors, a move with arguably little security success.

To date, 31 percent of the former Gush Katif residents still live in temporary housing and are scattered across the Israeli landscape. One group, however, remains close to their former home here in Halutza and is working tirelessly to build and establish flourishing desert communities along the Gaza border.

The beginnings of Halutza echo its landscape – turning untouched desert into a viable home. Located in a tight triangle between Egypt and Gaza, Halutza started out with some 30 Gush Katif families but has dramatically grown to 250 families across three communities: B’nei Netzarim, Neve, and Shlomit. The challenges holding these residents back include water management for the farm industry, the all-too-frequent rocket attacks from both borders, and, surprisingly, a lack of available housing.

"Frankly, we saw our future there. While it was complicated at first, it was a life with a lot of meaning," Adler said. The complicated part came from frequent terror attacks that plagued the community in the years leading up to the disengagement, with Adler himself witnessing an attack that killed five of his students. "We didn't feel any less pain in deciding to come here," Adler said, "but we were the first to jump into the water and give it a chance."

Others from Gush Katif were wary of again cooperating with the government, but Adler, considered a visionary of Halutza, listened more to his heart: "We believe in Israel, we are the future," he said of his motivation to take on this project. The beauty of Rabbi Adler's story, and the story of many in the Halutza area, comes from his tenacity and bravery to start all over again from square one.

From the disengagement until present day, the area of Halutza went from a dead, empty desert landscape to one dotted with new communities, expansive solar fields, and large farm areas that bloom green during winter and spring months. "The whole area is waking up," Adler added, with regard not only to the physical growth, but also to the awakening mentality that a good life here is possible.

Nave Zoldan and Michal Gutsman are two close friends who work together in the development of Shlomit, where they also live. The men, who were just teenagers at the time of the disengagement, have found themselves pioneering the area as young adults.

"To live in Gush Katif was a dream with no limits," Gutsman said of his previous home. He recalled the special spirit of the residents, one deeply infused into the regions’ teenagers who were constantly busy with "doing."

It's this "doing" that Zoldan and Gutsman want to bring to Shlomit, the newest of the three communities. Zoldan said, "We want to continue the vision of the Gush here," and they are actively doing so.

Shlomit will grow to 50 families by the end of the summer, with public infrastructure already in the works. The Jewish National Fund has been an integral part in the development of all three new communities, providing public structures like community centers, playgrounds, parks, and security command hubs that have helped make these fledgling communities into a reality. A recent $1.9 million grant from the The Leona M. and Harry B. Helmsley Charitable Trust to JNF, bestowed to support health care in Israel, will further help the growing Halutza communities flourish by making possible the funding of a regional medical center that will offer a range of services from general and family medicine to emergency care.

"I'm searching for where the meaning is in life, and I've found it here. It's a challenge, but it's for me," Gutsman said.

"Here, you realize that you're a part of the world, and I want my kids to realize it, too," Zoldan added. They both agreed that in Halutza, much like in Gush Katif, they are able to allow their kids to live a life of meaning, and not just hear their parents talking about living life that way.

Ayelet Bashari, a teacher and mother of three, agrees that there is something incredibly special about Halutza that reminds her of home in Gush Katif: "The symbol for me that this was the right choice came when I stood outside one evening. You see, it's very hot here during the day, but the heat breaks and dew begins to fall around 10 p.m. I breathed in the air outside, and it felt like home. It was a good sign."

It wasn't easy for Bashari to arrive at this feeling of home -- she was even skeptical of being interviewed because of her strong views of the disengagement. "I want to be very clear that I am not happy about the disengagement. I think it was a mistake, and it should not have happened," she said firmly.

Bashari and her family were removed from Gush Katif at a transitional point in her life – between the end of high school and the beginning of national service. As with the vast majority of Gust Katif residents of the past and Halutza residents of the present, national and army service commitments are taken very seriously, with a high percentage of young men joining combat units. "It was so hard to give my two years of national service," she added, but noted that her connection and love for the land of Israel helped her to push forward in spite of the pain and anger she felt.

As she once felt in Gush Katif, she is now beginning to feel in Shlomit. This was especially prominent during Operation Protective Edge last summer. "There was no feeling of fear because this is our home," she said both of living in Gust Katif during the Second Intifada and living in Shlomit during the last war. "The price is worth it because we need to be here."

Michal Gutsman’s sister-in-law, Batya Gutsman, is also a former resident of Gush Katif and a current resident of Shlomit, and feels very differently: "As a mom, it's something different. I experienced terror as a child [during the Second Intifada], and I lost people very close to me. But as a teacher and a mother, I see how the kids react, even to this day." She noted that many of her students still have trouble sleeping and relaxing due to trauma from last summer's war. "The tension is always there," she added.

'We started from zero'

Gutsman explained that she is constantly on the lookout for where to run to and how to be prepared for the next incoming attack, which could be any day. The area experienced warning sirens of incoming rockets in early July.

During last summer's war, Gutsman's husband was called up for reserve duty, leaving her alone with their three small boys. "It's very scary to sit in a bomb shelter with kids for hours, knowing that your husband is out in this [the war] and that you don't know what is really going on."

But asked why it is meaningful to live in this area, she became thoughtful: "To build from the beginning is very special," she said. "We started from zero, and the people here are connected to the land and love for Israel. It keeps us here, even if it's not simple. We have no other choice – this is our land."

It's this active, pioneering spirit that has pushed these families forward in the past 10 years.

So far forward, in fact, that there is physically no additional room in their preschools for the area’s rapidly growing population of children. Bashari reported that in Shlomit, the smallest and newest of the three communities, the two schools already in existence are filled to maximum capacity and that she and others must send their children to nearby communities for school.

"The rhythm of growth is so fast," she said of the area's population increase from new families moving in and from families growing and expanding. Plans to build new schools are already in the works, and one should be ready by September for the beginning of the next school year.

The magic of Gush Katif may be physically impossible to experience for those who were not a part of it, but its spirit definitely lives on through the residents of Halutza. Although the pain, anguish, and anger are often still present, these pioneers have found a way to channel their determination and enthusiasm through settling the desert frontier, which for them, is a huge, blank canvas of endless possibilities. Every day is one more step forward in the realization of their dream to pioneer and protect the land of Israel they love.