Next up on Far East tour, bringing Israel to Vietnam 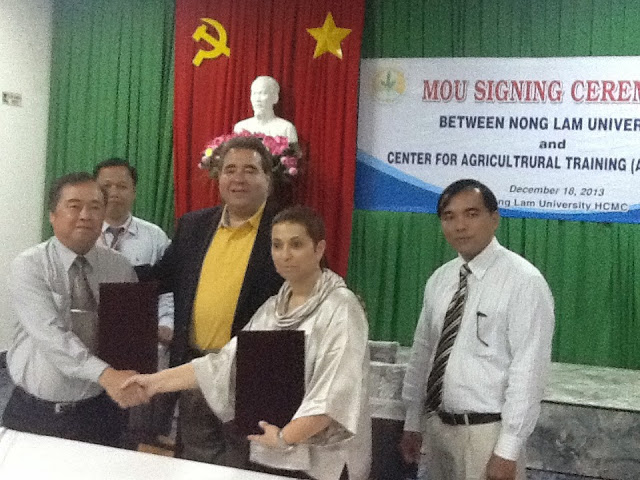 On Wednesday, the Arava International Trainee Center (AICAT) tour stopped in Ho Chi Minh City, Vietnam, where they signed a Memorandum of Understanding for student cooperation between AICAT and Nong Lam University, the largest university in South Vietnam. This will increase the student recruitment for 340 to over 500. This MOU is in step with the plans of Vietnam's Minister of Agriculture, who announced while the JNF/AICAT group was visiting, that the growth of agriculture is a priority.  He then detailed a plan for now through 2030, which includes technology advancements and economic farm growth. All of these priorities are directly in relationship to the goals AICAT.
In meetings with university president and the dean of the agricultural department, they expressed tremendous excitement about this M.O.U.

On Thursday, the team visited Hanoi, in North Vietnam. In their opinion, it was a world difference from South Vietnam. They met with president of Thai Nguyen University the largest university in Vietnam with almost 50,000 students. The most popular majors are agriculture and forestry.
The coordinator of the relationship with AICAT is Dr. Mai Thu. This year there are 165 students from the university studying at AICAT with a target to increase to 200.
They then met with Israeli Ambassador Meirav Eilon Shahar, an amazing women who has taken Vietnam by storm. Everyone speaks highly of her -- from government officials, University officials and the small Jewish Community. After the meeting, our team can see why. They had a frank and open discussion on Israel'  impact on Vietnam and its importance to the emerging South Asian Market of over 600 million people.
21% of Veitnam's GNP comes from agriculture, yet over 50 %of the population works in the industry. The discussion focused on how to utilize the AICAT program as a public relations message illustrating a positive Israel and the major impact the new AICAT master's program will bring.  During the meeting, Chani and Eyal received a call from the Israel Foreign Ministry asking them to present AICAT to all of the Israei Ambassadors at an up coming conference and also asked them to increase student enrollment from Africa.
I guess that new campus for AICAT is needed more than ever.
PLANT TREES IN ISRAEL