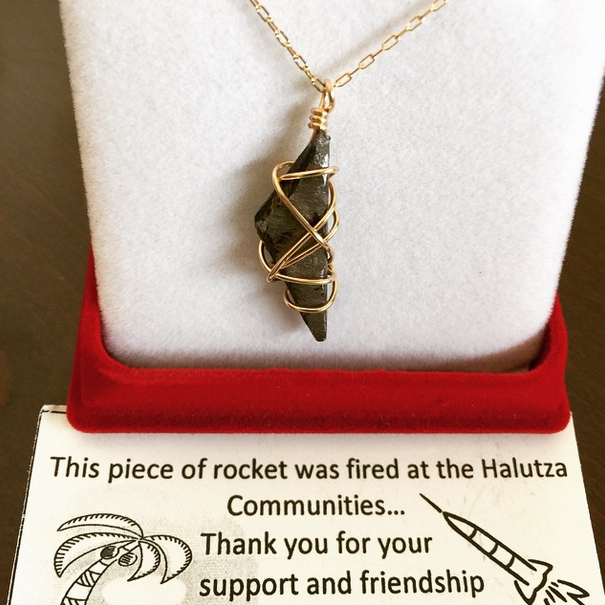 The rockets that fell on Israel last summer would, to most Israelis, represent nothing but chaos and destruction. Yedidya and Shiran Harush look at the twisted metal and see those things. But they also see strength, resolve, even beauty.
The husband and wife team has collected shards of rockets that rained on their community – Halutza in the remote northwest Negev desert on Israel's borders with Gaza and Egypt -- and crafted them into stylish necklaces, the kind you might find in a high-end boutique.
The rocket jewelry "symbolizes love versus hate and create versus destroy," says Yedidya Harush, the Jewish National Fund's liaison to Halutza, which was founded in 2005 by Israelis evacuated from their homes during Israel's disengagement from Gaza that year. "It means that they tried to destroy us but we create."

Between July 8 and August 6 of last year, 3,360 rockets were fired from Gaza toward Israel, according to the Israel Defense Forces, with 2,303 hitting the country. Yedidya Harush says around 250 struck the fields and streets of Halutza, which is made up of three towns -- Naveh, Bnei Netzarim and Shlomit -- that now house close to 400 families in all.
With the help of Halutza's head of security, the Harushes collected pieces of rockets, then removed the rust, filed the sharp edges, cut the fragments to wearable size and plated them in silver or gold. Some of the rocket pendants are shaped like the state of Israel.
"We decided to do something good with all these rockets and give people the opportunity to have something they can wear and carry with them that is part of what we had here," says Yedidya Harush, who grew up in Gush Katif, a bloc of 21 Israeli settlements in the southern Gaza strip that was cleared out 10 years ago. He was 17 when Israel disengaged from the land.
So far, the couple has made more than 200 pieces of jewelry out of rockets launched at Halutza during Operation Protective Edge. Some are selling on eBay and elsewhere, generally for between $50 and $65, plus shipping.
"People are amazed and keep on wanting to buy more," Yedidya Harush says.
The previously uninhabited area of Halutza derives its name from the Hebrew word for pioneer. As part of its Blueprint Negev initiative to sustainably develop the Negev, the JNF has supported Halutza since its beginnings by clearing land for housing and farming, purchasing temporary prefabricated homes, laying basic infrastructure for schools, parks, and community centers, and paving roads.
PLANT TREES IN ISRAEL