Student's revelation atop Masada: 'In that moment I knew why I was Jewish' 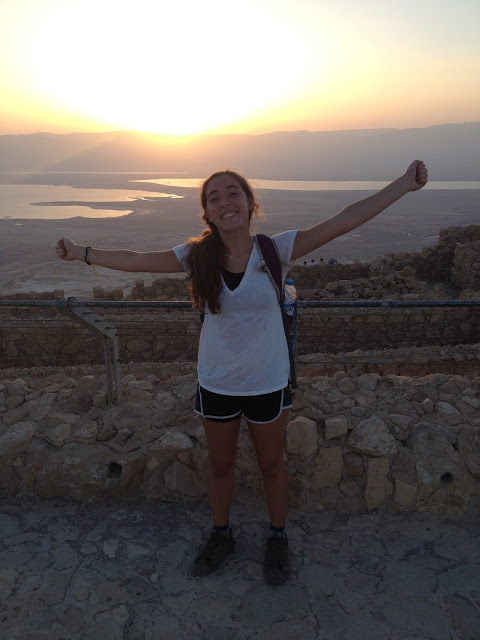 Ivy Bernstein, a current student at Alexander Muss High School in Israel, shares her reflections on climbing Masada with her classmates.

Waking up at 4:15 a.m. is never ideal, especially when breakfast consists of plastic-wrapped hard-boiled eggs, and you know an hour of intense cardio lies ahead. Despite these obvious discomforts, adrenaline poured through my veins on the morning of September 18, when I knew I would be climbing Masada. Our whole grade chanted together and played games to pass the time as we hiked, but soon enough the steps became closer together, and speaking became too difficult.

The winding, daunting snake path slithered up the mountain, and I placed one foot in front of the other, my heart racing and my sweat dripping.

The sun rose with us.

Between breaths I gazed at the most beautiful sight my eyes had ever seen, and with each step the sun's rays drenched the sky with deep pinks and reds. There were moments when the climb felt impossible, but I finally reached the top, and when I did I was gifted with the victorious sun peering down at us, spreading its rays of orange across the lowest valleys and swooping mountains.

The most beautiful part was I felt like we had earned this beauty.

My grade lined up on an observation point, looking over the deepest points below the fortified mountain. We all yelled Am Yisrael Chai one word at a time, and the words echoed back to us. I knew there must be some scientific explanation for it, but something felt divine about that moment, as if the Jews who died here were thanking us for verifying this message, that the nation of Israel did in fact live in each of us in our hearts.

I knew what happened on the dirt where I stood. The Jews were forced to commit mass suicide rather than be taken as slaves or tortured in the hands of the Romans. Children died here, and I did not take that lightly. In that moment I knew why I was Jewish and I knew my current existence was truly miraculous, and in that moment I enjoyed that perfect sunrise for all the Jews that couldn't.
PLANT TREES IN ISRAEL