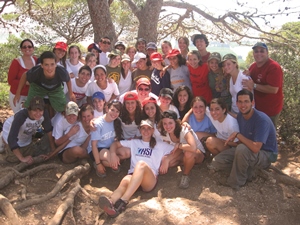 October 2, 2013 -- New York, NY -- Zionism claimed a victory this week when Jewish National Fund (JNF) announced a new and expanded partnership with the Alexander Muss High School in Israel (AMHSI). Pursuant to an agreement unanimously approved by both JNF’s Board of Directors and Board of Trustees as well as by AMHSI, JNF will appoint all members of AMHSI’s Board of Directors and integrate AMHSI’s operations into JNF’s broad array of educational initiatives.
“Many people in the Jewish world today – even the most committed – are afraid of the ‘Z’ word: Zionism,” said JNF Chief Executive Officer Russell F. Robinson. “Not Jewish National Fund. It is part of our everyday vernacular -- whether we speak to young or old, whether we are talking about our work in Israel or our Zionist educational activities here in the U.S., when we refer to our rich history and when we speak about our vital and promising future. This enhanced partnership between JNF and AMHSI will catapult Zionist education to the next level.”
As the single largest provider of Zionist education in the U.S., Jewish National Fund offers myriad ways to connect young American Jews to Israel – from trips to b’nai mitzvah projects to education and advocacy programs.
For over 40 years, AMHSI has led the field in providing transformative pluralistic Israel experiences for high school students. AMHSI has developed fully accredited academic programs for teens to strengthen their Jewish identity while developing deep-rooted connections to Jewish life, to the Jewish people, and to Israel. Today, the school has more than 20,000 alumni – many of whom are active leaders in their Jewish communities.
While JNF and AMHSI have enjoyed a long-standing partnership, both JNF and AMHSI see this new relationship as greatly beneficial to the greater Jewish community.
“As the parent of two children who attended a semester program at the Hod Hasharon campus,” said Joseph Wolfson, Assistant Vice President of JNF and member of the AMHSI Board, “I know that AMHSI provides a unique experience for children to learn about the history of the Jewish people, our connection to the Land of Israel, and our Zionist heritage. JNF, being the original Zionist organization and having a broad array of Zionist education initiatives, is a natural partner for AMHSI. When the opportunity for JNF and AMHSI to work even more closely arose, I was an immediate supporter, and our review and work to bring together the relationship only reinforced my view. I am excited about the possibilities we have to work together and look forward to great success. I know that this partnership can have a lasting and enormous impact on the next generation of Zionist leaders.”
“All through the years I have had great respect for the activities of Jewish National Fund,” said Stephen Muss, Chair of AMHSI. “JNF is famous for planting millions of trees, water conservation, and dedication to Israel and the Negev. JNF and AMHSI have had a growing relationship over the years that has led to the Board of Trustees of both JNF and AMHSI to approve an even greater integration of AMHSI, so that both organizations can consolidate their educational efforts and we can focus on what’s important: teenage Israel experience, Jewish continuity and Zionist education.”
Orit Rome, newly named AMHSI Co-Executive Director who has served in many roles including Chief Financial Officer and Chief Operating Officer, will now work in partnership with the new Co-Executive Director, Rabbi Leor Sinai.
Leor made Aliyah with his family in June 2011. His professional resume includes the Dan Hotels of Israel, Jewish National Fund, The Jewish Lens, Hillel Israel, and The Jewish Agency for Israel. Leor was ordained in 2009 at The Jewish Theological Seminary and works passionately to build networks of Jews worldwide with Israel at their center.
Leor and Orit will run the day-to-day operations of the school, managing the marketing, fundraising, education, finances, facilities, and overall administration. Rabbi Philip Nadel will continue as the head of the school, doing an outstanding job of keeping AMHSI’s educational standards at a very high level.
“We are all about growth and about the development of the next generation of leaders,” said JNF Chairman of the Board Ronald S. Lauder. “AMHSI is the leading high school program in Israel and we take great pride in the knowledge that our oversight and operation of AMHSI will help ensure another generation of students. We believe in it – in its history and its future. We have a moral obligation to make sure the school continues to thrive. And we will.”
“When I was at Muss,” said Matisyahu, popular musician and Sept. ’95 alum, “it was probably the first time in my life that I felt that being Jewish was something that was important and there was something to be discovered.”
Said AMHSI alum (June ’82) Wayne Firestone, former President and CEO of Hillel: The Foundation of Jewish Campus Life: “AMHSI is a program that speaks in such universal terms to all young people and allows them to have an intellectual and personal connection to explore their Jewish identities.”
PLANT TREES IN ISRAEL